Scar Tissue at the Arts Club on Granville Island 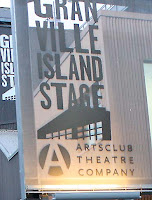 I knew nothing about Scar Tissue until I was reading their promo brochure. It was a play based on a novel by Michel Ignatieff (yes, the politician) about a family coping with the mother's Alzheimer's Disease and facing the reality that the children and grand children may carry the same genes.
This story was written for the reality of  looking into the sometimes difficult relationships we have with our parents and siblings and maybe trying to understand and forgive not only their flaws but also our own.
Posted by Liza at 5:01 PM 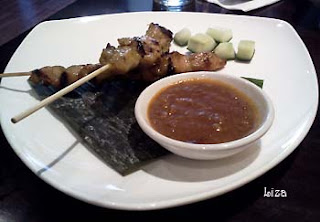 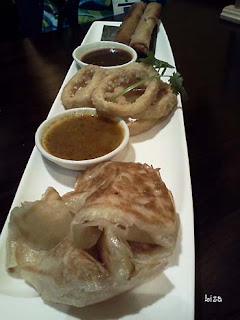 My girlfriend and I were looking for a place to further indulge ourselves after a perfect spa day. I haven't eaten all day, so the first interesting place was it - Banana Leaf on Davie (former location of Kam's). 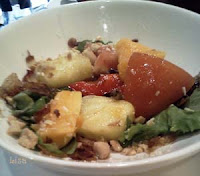 We shared the appetizer sampler for two (A platter of green salad, chicken satay, spring rolls, roti canai & calamari), which we followed with some King Prawns, which was the special of the day.
I have eaten at Banana Leaf a few times, and although, it's not my "go-to" Malaysian place (that would be Tropika), it's a satisfying place for homey Asian food.
Posted by Liza at 4:26 PM 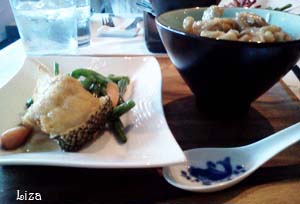 There are a few things that are a bit peculiar about Hakkasan, for one, its location. It's not in a hub, rather, it's amidst industrial Richmond. Another oddity is that the staff were actually friendly and attentive - definitely not a norm for a Chinese restaurant. If you are looking for familiar fare such as orange chicken or bright red sweet and sour pork, this is NOT the place.

For starter we had a curried whelk. What's a whelk, you ask? It's a sea snail (but imagine a regular escargot on steroids). It was chopped and curried and stuffed back in the shell. It is interesting, but nothing to get excited about.
It is followed by a seared foie gras salad in a bed of mixed spring greens and strawberries and a bowl of lobster bisque.

Next course is a Smoked Mushroom Beancurd Crepes. This is an interesting dish that I would like to remake at home. 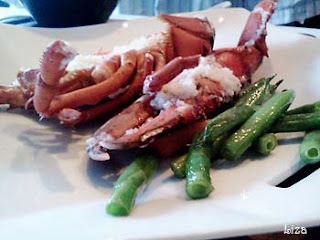 Main entrée for me is a Chilean sea bass, it is cooked perfectly. There isn't any exotic flavouring on this one, it's all about the fresh ingredient and cooking technique. My friend chose the lobster. Also cooked perfectly. Both meals came with a bowl of rice.
They will be closing temporarily soon, but I would love to come back to and try their other items. 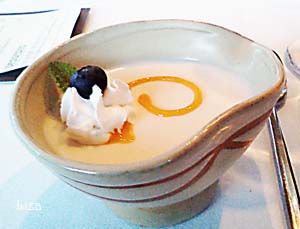