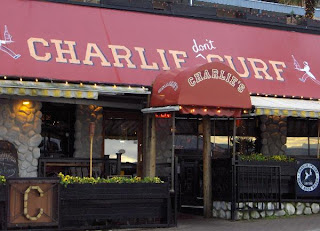 This eclectic restaurant has been one of the lucky ones that  manages to endure. It's been around for a while. [FYI: Their strange name, if you aren't a film buff, is a famous line from the Apocalypse Now.]

White Rock waterfront is so small town and beach town picturesque. Sitting on the patio, eating your dinner while the train goes by takes life to slow motion. Charlie's decor is not quiet or staid, it's a bit rock and roll with their many black chandeliers and memorabilias.

The food, while not spectacular, is alright. Since I live close by, I do go to Charlie's every now and then. It's a bit like going to Cactus or Brown's but with a spectacular view. I read the other reviews and there were numerous complaints of the bad service, well, I was there 2 days ago, and I actually made it a point to tip the waitress well because she was great. I'd still go there for a casual fare.
Charlie don't Surf
15011 Marine Drive
White Rock
Posted by Liza at 9:40 PM 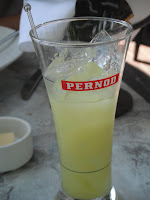 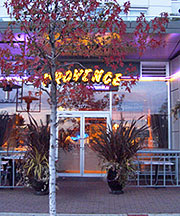 I am not in the midst of lavenders in France, but in town, having a nice lunch to celebrate my son's 21st birthday. We are walking around Yaletown and have chosen this inviting patio. 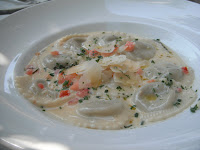 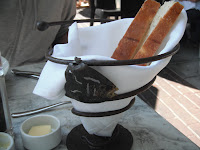 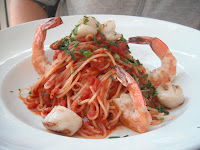 To start, for drinks, I have ordered us each a pernod (may as well be authentic). Cuba has their rum, Mexico has their tequila, and Provence has Pernod Ricard.  We have both decided to get the prix fixe menu that starts with either an array of tempting antipasti or salad, mushroom ravioli or seafood spaghettini, and your choice from the many desserts. I am very excited to see that they had merguez (North African spicy sausage that is common in France because of the large Arabic population)  -- I've never seen it in local restaurants before. They have cooked it with fennel and tomato sauce -- it was a nice change from the usual. My son, to my surprise, have ordered the Trio of Smoked Fish (trout, mackerel, salmon, pearl onions, gherkins), -- silky texture, nicely smoked, also a very nice change. They serve the food with slices of fresh crusty bread and some herby (is that a word?) ones. My mushroom ravioli is good but sadly it's not as an, "omg, this is sooo good," as the ones I have had in Italy. My son have enjoyed his pasta with scallops and prawns. To end the meal, we have the clafoutie and lavender cheesecake. The clafoutie is not exactly as I am expecting it to be, but it is very fresh and lovely nonetheless. The cheesecake is quite good. We are surprise how large the portions are. 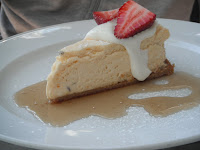 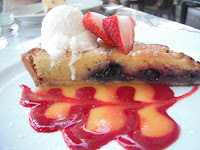 I think this place is a good place to go if you have been wanting to try French food. Most people are intimidated to go to a French restaurant because they see it as being too formal and a bit stuffy. This place feels casual. The menu is not strictly French, it has many Italian or Mediterranean items. Sitting in the patio will give you a nice view of the water. I can't wait to go back and try the other items (bouillabaisse) or maybe even their "afternoon tea." Judging from the other reviews about this place, it seems to be a good destination.


I'm not one who dwells on nostalgia, but I couldn't help but be transported to my youth when Air Supply sang their hits one after another. Lame... I know, but oh, well. 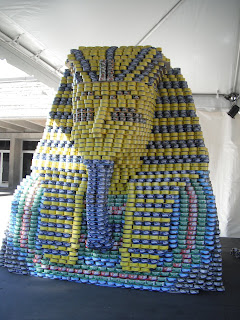 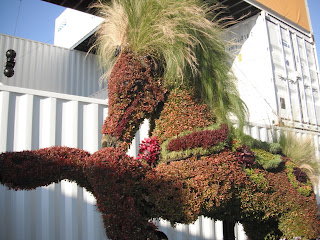 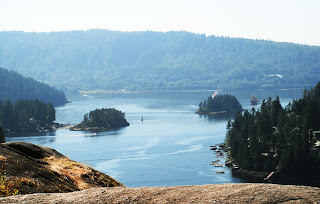 I have been looking for an easy hike that I have never done before to do with my girlfriend who is a newbie hiker. I chose Quarry Rock because it is easily accessible by public transportation (don't feel like driving) and classified as "EASY." And duh, I later realized that it is the first leg of the Baden Powell trail, which of course, I have just completed recently.

It is less than 4 km and has one of those fantastic views for destination. It has been an interesting hike going with her because she lets me see with new eyes things that I may not consider. For instance, a person who has never gone hiking before may find it a challenge to be constantly watching out for numerous (endless really) protruding roots, loose rocks and constant uphills and downhills in loose surfaces.

I am questioning the rating system for hiking trails. While it is true that Quarry Rock is an easy hike for hikers, it may not be so easy for non-hikers. Just sayin...

My first time kayaking is in Hawaii. It is beautiful and the ocean is oh so warm -- there are brightly coloured tropical fish visible as you paddle and there is a possibility of seeing dolphins (... and sharks). It isn't just  kayaking but the means to get to Kealakekua Bay and Captain Cook Monument and do some snorkeling. So, this being my first time kayaking is the ideal.

As much as I have loved that experience, I have been somewhat skeptical of trying it here at home. The water is always oh so cold. I cannot imagine it being a pleasant experience if I am constantly splashed with cold water. So, I am quite surprised how much I enjoyed kayaking in Deer Lake in Burnaby yesterday evening. My girlfriends and I, armed with our Groupon started out around 6 pm for our two hour rental. They give us a quick lesson on how to paddle and off we go.

It is an easy and enjoyable activity. You can go as leisurely as you wish or go hard if you so choose. I circled the the lake very easily twice and just leisurely paddled the rest of the time enjoying the sunset while gossiping with the girls.

We loved it so much, that we have decided that this is something we would like to do regularly. (Oh, have I mentioned that the water is warm?)
Posted by Liza at 2:19 PM 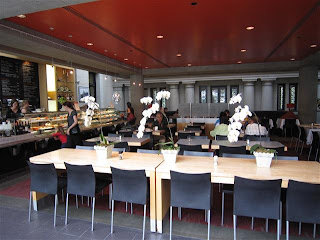 I am often at the Vancouver Art Gallery so I probably take this place for granted, it never even occurred to me to talk about it. It's such a perfect place to lunch though - location, location, location -- in the heart of downtown on Robson. They have an excellent selection of paninis, salads and desserts.In the summer time, you can sit out there in the patio with the flowers, music in the background and lazily people watch as you sip your sauvignon blanc and graze on your salad Niçoise or sip your cappuccino while indulging on some tiramasu. 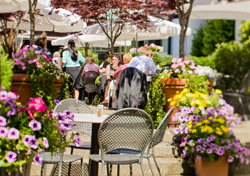 It's a very pleasant place to be in the summer (if you can manage to find a table outside -- it gets very busy on beautiful summer days). 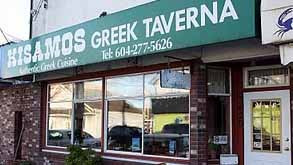 This place is THE place to bring your family for a casual lunch or dinner. Very unpretentious and reasonable and it feels very homey. This Greek restaurant in Steveston will feed your soul. 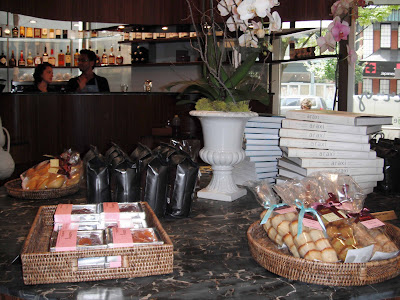 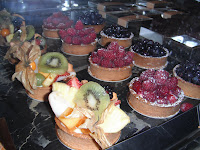 One of the newest pretty places. So girly, so French, so yummy. Besides beautiful pastries and chocolates, they also have baguette sandwiches and wine of course.

It's not exactly a cheap place to eat, but you can't help but feel very chic -- good for ladies who lunch (quick lunch that is). 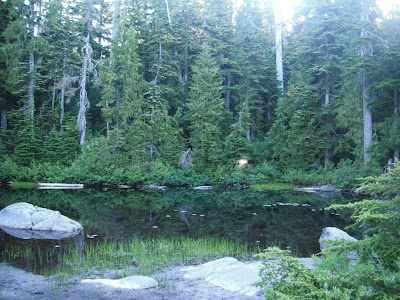 Wow, despite being more difficult, I have enjoyed this hike (according to the West Van website, ... "The hiking time from Cleveland Dam to Horseshoe Bay is more than 12 hours commencing with a fairly steep climb for the first 45 minutes out of the Capilano Valley and through the upper British Properties") a lot better than the first part of Baden Powell (the absence of rain and thunderstorm most likely helped plus the much more streamlined backpack). We started at 8:15 am just a little off Grouse Mountain at Cleveland Dam and were having a very cold hefeweizen in Deep Cove by the next day at around 2pm. 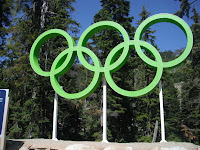 Cleveland Dam to Cypress Mountain (11 km) was a reasonable hike. We rewarded ourselves with an ice tea at the chalet, rested our feet for a bit and just enjoyed the sun. We started again at 3:30pm and began the seemingly unending ascent, knowing what we know now, though, it was nothing compared to what was coming up towards the end. We were quite rested and were feeling pretty good at this time, we were prepared to hike for several more hours intending to stay overnight at Eagle Bluffs. But there were so many beautiful lakes along the way at the Black Mountain area that we were enticed to stay and ended up setting up camp in one of them at around 5pm. Each lake was more beautiful than the next. If you don't mind the cold water, they are swimmable. We would have gone in if it was earlier in the day with the sun a blazing, but because it was already late, we didn't want to be cold and wet for the evening. We started our camp fire and had our pad thai dinner and just enjoyed the peace and the view of the lake with the occasional swoop of a crane (I think, it's a crane, but I'm not sure).


The next day, we started our fire at around 7am and were soon having our porridge and coffee. We were packed and ready at 8:15.  We knew that what was ahead will be the hard part -- and it was. But first, Eagle Bluffs -- this place is what BC is all about. It is breathtaking. It is beautiful. This is the place where you would contemplate on how lucky we are to live in such a place. 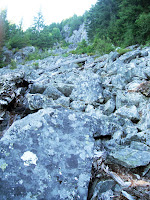 Now, the fun part, the descent!!!  Rocks, rocks and more rocks -- sometimes boulders, sometimes smaller, but a river of rocks to go down on. The most important thing I have brought on this hike were a pair of suede gloves, they enabled me to hang on to the often sharp rocks, allowing me to pull myself this way and that way. After  this, everything else was not as bad -- there was still another river of smaller rocks, a few logs to cross (think scene from The Lion King when Pumba,Timon and Simba are crossing the log), and many many steep places with roots and yet more rocks to impede you.

I knew I was enjoying my hike when I noticed that after each difficult section, I would sing to myself (and sometimes a little louder) ... 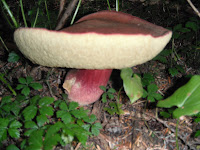 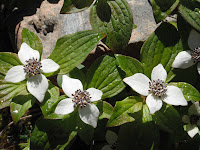 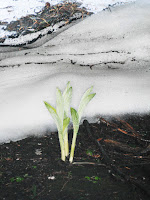 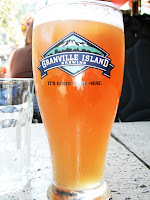 Picnic at the Beach by the Vancouver Art Gallery

Not exactly at the day in the sand with ocean breeze blowing... this is in front of the Vancouver Art Gallery on Robson. It's called "Picnurbia" -- they encourage people to ... yes, picnic on yellow artificial turf. It has built in benches and yes, people actually are there picnicking and sunning as if they are at the beach.

(I was in Paris one summer, and they actually did bring the beach right in the city. They trucked in sand in open spaces and set up beach volleyball courts for people, they set beach lounge chairs all over the place and there were all sorts of beach activities and festivities. It was more authentic than yellow artificial turf. Oh, well, Vancouver is trying.) 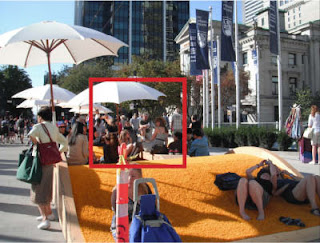 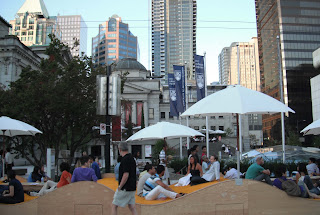 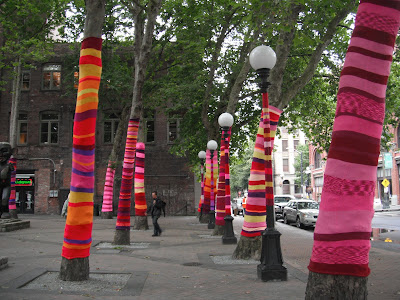 Until a few months ago, I have never heard of this term before -- yarn bombing. For those of you, like me, who are non-knitters, it is graffiti using yarn or knitted materials. I was in Pioneer Square in Seattle and came upon it in Occidental Park. 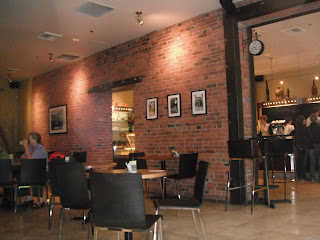 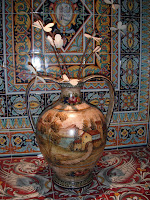 Caffe Umbria
And while you are there, you may as well check out this fabu coffee shop I stumbled on -- excellent coffee, pastry and ambience.
Posted by Liza at 10:57 AM