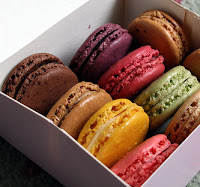 Granville Island has always been such an interesting place for walking around in. Right now, they are having Winterruption - they have entertainers all over the market.

Have you guys taken the little aquabus lately? Well, if you haven't, do it, it's a nice way to get from here to there around Granville Island and downtown.

If you haven't discovered the culinary school for their pastries, coffee and lunch and dinner, then you are missing out. I had some to die for macarons yesterday. Sooo good.
Posted by Liza at 12:22 PM

I've never heard of A Married Couple before, but apparently, it's quite well known. It's directed by Alan King in 1969, set in Toronto. This documentary of a married couple seems to be the pre-cursor to reality television (a la Jessica Simpson and Nick Lachey). It is astounding that some of the dialogue seems to be lifted from my own marriage. After you see it, go home and Google it on YouTube to see what has happened to them after the movie (I won't put a link here, so that you won't be tempted to watch it before seeing it.)

This is a thought provoking documentary that makes you reflect on your own marriage. It's showing at Pacific Cinemateque until March 3.
Posted by Liza at 11:48 AM 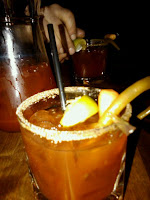 It wasn't game night last night, but the Kingston  was usually a good place for it. I've seen Mike Donnelly (the guy who sings Oh Canada at the games) here several times. Good pub grub, decent prices, good ambiance with their huge fireplace and huge iron candle chandelier. They offer a pitcher of Ceasar (and other drinks)! Their prime rib burger was nice and smoky and their flat bread pizzas also are good.

755 Richards Street
Between West Georgia and Robson
Posted by Liza at 10:59 AM 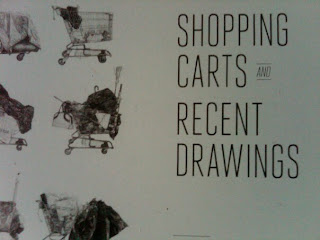 You may have noticed that swinging pendulum from outside this glass building (HSBC) on Georgia across from the Vancouver Art Gallery. Last night, I was fortunate enough to be walking by when they were having an opening of Taizo Yamamoto's - Shopping Carts and Recent Drawings. Check it out! They may not have the free wine anymore but it's there free to look at from February 21 - March 5, 2011. Plus, that pendulum is very mesmerizing to look at.
Posted by Liza at 10:42 AM 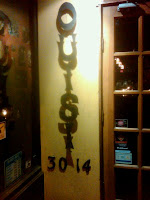 My favourite at this Cajun and Creole place is their corn bread. Yumm, just the right sweetness, it is toasty and perfect. Martinis were on special so I had one - Side Car martini, it was ok, could have been shaken a little longer. My friend who is a fan of True Blood couldn't resist the Sookie Stackhouse (looked like blood tainted libation). I had mussels in cream sauce with some shoe string fries on top -- not bad. Over all, I'd go back. Prices were reasonable and did I mention the cornbread was delish. 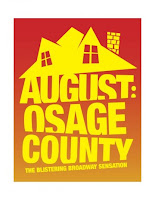 Not exactly a feel good play about a family, but it does make you feel somewhat better that yours is not as messed up (hopefully) as The Westons. It has sex (with questionable partners), drugs (mom) and (some) rock and roll. The actors are all fantastic with the exception of two -- the teenager, and the "Indian," they are extremely stiff, artificial and are constantly yelling their lines. Nevertheless, the cast received a standing ovation.


I recommend  August: Osage County.
Posted by Liza at 9:36 PM 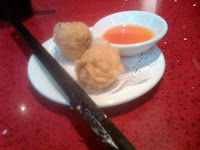 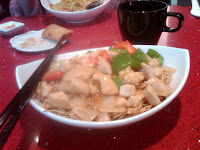 Last Thursday, a friend and I decided to hang out in the Chinatown area and see a movie at Tinseltown aka International Village. It was quite late in the afternoon on one of those, oh so familiar dark, cold and blustery day. We haven't eaten all day, so we decided to try the first restaurant we came upon -- the East Fusion Food, a casual place. We decided to order from the set menu of 3 course meal for $9.99. My order consisted of hot and sour soup, two fried wontons and a generous portion of spicy friend chicken with fried noodles. Overall, it was a decent place to have a meal. It had a somewhat modern feel, more so anyways than a regular Chinese restaurant in the area.

We decided to postpone the idea of walking around the Dr. Sun Yat-Sen garden, it was just too miserable. It's too bad, it would have been a 15th century view of a Chinese garden. We did, however, walk around and browsed at the various stores. We went in a store called Blim, an 80s and 90s looking establishment where they hold artsy-craftsy workshops and an art gallery up the stairs. The current exhibit was called Holy Men - a series of holographic type of images of "holy men."

Our movie was starting soon, so we headed back to The International Village. We saw, "The Illusionist." Nope, it's not the one with Ed Norton, this one is an animated French film. "Details the story of a dying breed of stage entertainer whose thunder is being stolen by emerging rock stars. Forced to accept increasingly obscure assignments in fringe theaters, garden parties and bars, he meets a young fan who changes his life forever." (IMDB) It was sweet.

What a pity that The International Village is not a more successful hub than they could be.  I hope more people will discover or re-discover it. The selection of movies are very diverse, from Hollywood movies, to small art house types. The second floor consist of several art galleries and a food court while the main level holds the shops.
Posted by Liza at 9:50 PM Afghan Horsemen is one of my favourite places to take people to. It was voted best middle eastern restaurant by Georgia Straight for the last 3 years (I was one of those voters.) This is a very different place for a casual get-together. You sit on the floor on cushions (they have tables too, but it's more fun in the tent like area) and have your meal on a low table. I like to order the platters so that I can try a variety of food.Their potatoes are to die for, and the lamb melts in your mouth tender. I took my niece and nephew here in the summer time and they say that it's the best food they have ever eaten.
Posted by Liza at 10:23 PM

Pearl on the Rock

I was at Pearl on the Rock during Dine Out in early February early in the evening, there were only two tables occupied. It sure didn't last long, though, in no time at all, every table was taken. This place had an amazing wine list! Very impressive (if you can swing $1000 for a bottle, they have it available.) I suggest their set menus. They were well designed and thoughtfully prepared. The sipping amuse bouche in a shot glass was a nice way to begin the meal. The most interesting part of the meal were the soy "pearls" (droplets that look like caviar) that came with the shucked oysters. Very cool.
Posted by Liza at 9:47 PM 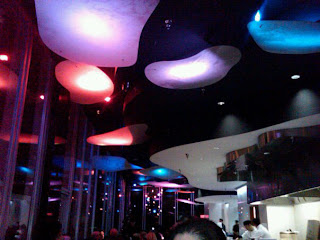 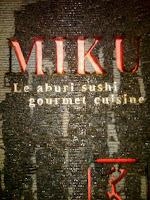 Miku is not the usual sushi joint. It is an aburi-style (lightly seared and infused with savory French sauces) cuisine. It is best if you order their Omakase (literally means "it's up to you).  It's a multi-course meal. Not an all you can eat sushi buffet, but very well made individual dishes. You don't get a dish of soy sauce or wasabi for dipping because each sushi or sashimi is perfect on its own (it will be like putting ketchup). I guarantee that you will eat each morsel with great interest, trying to figure out the nuances and mystery of each flavour. 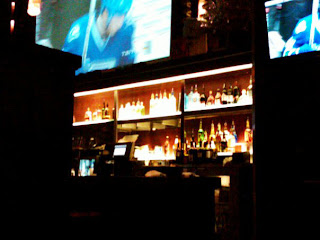 Ok, a few of you may know that I enjoy watching our boys (Kes). The Chophouse is the place to do it!

And... if you are going to a steakhouse, you may as well have the Chateaubriand for Two (slow roasted Prime filet ideal for two, served with scallop potatoes, seasonal vegetables with French table service). Vegetarians need not apply.

Service was also very good. Worth the value.
Posted by Liza at 10:21 PM

What a fantastic weekend I had. 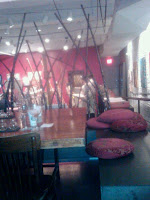 The evening started at 5 pm at Raw Canvas with my Groupon on hand. This place is not exactly a restaurant, it's more like the place before you go to eat dinner - wine or beer and charcuterie (patés, terrines, sausages, cheese). Ambiance is quite eclectic. The best thing about this place is that it's also a studio. You get a canvas and they provide everything you need to paint - easel, brushes, paints, tapes, painting spatula, smocks, etc. This is a very original place to go on a date or with friends. Some people who go there are artist, but most are just there to channel their inner Georgia O'Keeffe or  van Gogh.
Since Raw Canvas is in Yaletown, by the time we left, we were there for the light installation for the Olympic anniversary. It was a variety of light shows -- there were shadows installed on windows so that it seemed that there were things happening inside, there were patterns on walls, etc. That was quite original for Vancouver. I hope they will keep doing such events in the future.
Next place we went to was to the Playhouse Theatre for a production of Death of a Salesman.  Wow! It's hard to believe that Arthur Miller wrote this play in 1949. There's been some changes, but for the most part, it has captured its essence. Acting, set, costumes are all well done. I definitely got quite verklempt when Bif confronted his dad. Go see it! It was a standing ovation. 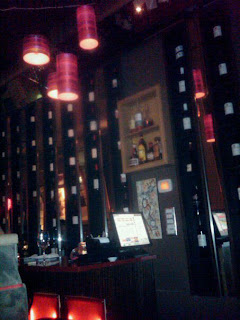 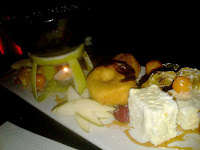 It's 11:00 when the show ended and we headed to West Broadway area to Bin 942. This is a tapas place. It's very obvious that the dishes are very well thought out. Decor is also quite eclectic - huge mirrors up high, old rustic door to separate tables. By this time, however,  they were out of their special and various other things we wanted. We had braised short rib with agnolloti and some calamari confit. We ended the meal with their fondue. That was the best part! It had a variety of dipping goodies from freshly made doughnuts, macaroons, raspberries, kumquats, poached pears and my favourite, marshmallow - not the store bought ones, but I think they were probably made there, it had passion fruit flavour - yumm, all to be dipped in rich dark chocolate. Needles to say, this will be my go to place for dessert after a show (walking distance from The Stanley Theatre).